As a child, Christian became obsessed with the illustrations in his books and soon began to draw the characters and creatures within. As an adult, he spends most of his free time walking in the New England woods or home with all his adopted cats and dogs, playing records and drawing; always drawing. Influenced by symbolism and the esoteric as well as a passion for the art of illustrators like Edmond Dulac, Arthur Rackham and Frank Frazetta can be seen in his own pencil and ink creations. Christian's tattoos show all these things; shaded and cross-hatched illustrations of client's ideas. Starting his career in New Haven, Connecticut in 1998, he worked alongside various talented tattoo artists, eventually striking out to start a custom shop with fellow artists Laura and Luis. In 2004, Lovecraft Tattoo was formed, it's name an homage to the writings of H.P. Lovecraft, Clark Ashton Smith and the ilk and their influence on his art and aesthetic. The images on the following pages are a sample of Christian's work. For more information on booking an appointment with Christian Please click the link Christian DiMenna to contact him via email or call him at the studio. 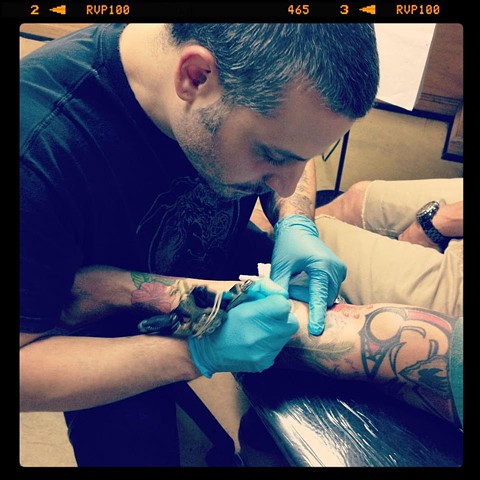